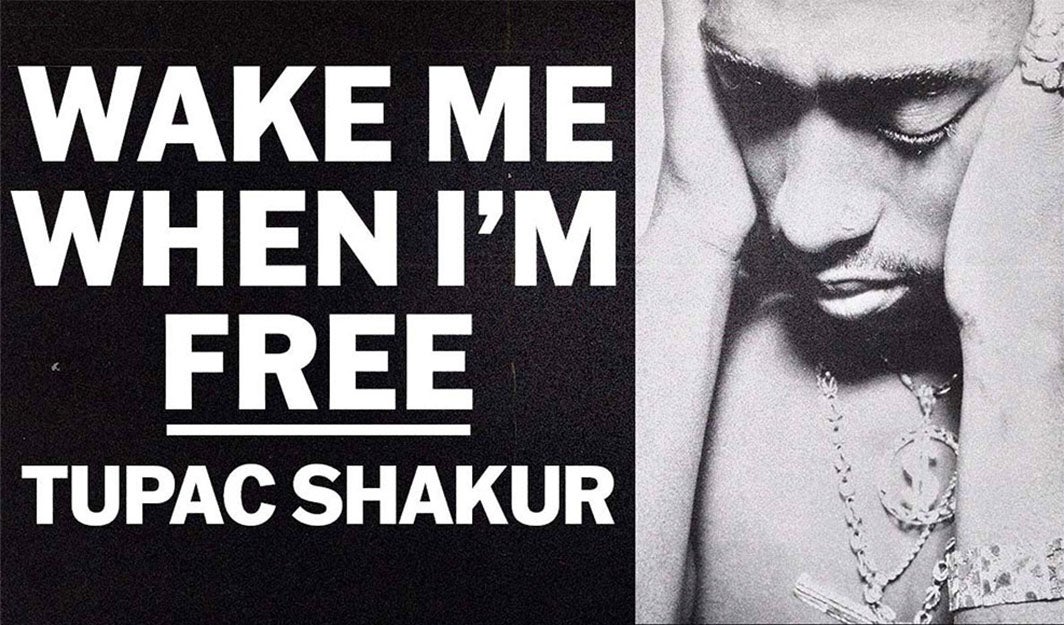 Tickets on Sale November 12 at 10AM PT

Twenty-five years after his murder, Tupac Shakur remains one of the most complex and prolific artists of his generation. With over 75 million albums sold worldwide, he is one of the top-selling artists of all time. In 2017, Tupac was inducted into the Rock & Roll Hall of Fame, making him the first solo hip-hop artist to be recognized for inclusion in his first eligible year. Tupac also found success and critical acclaim as an actor, starring in popular films like Juice and Poetic Justice. A brilliant lyricist and critical thinker, Shakur can be described as a social observer and a political activist devoted to social change. Born to a Black Panther and named after a Peruvian revolutionary, Shakur seemed fated to reject authority and give voice to the disenfranchised.

Tupac’s mother and Black Panther Afeni Shakur (1947-2016) played a prominent role in Tupac’s life and her spirit brings a moving and parallel presence to WMWIF. Tupac’s Godfather and Special Advisor to the Estate Jamal Joseph said, “Afeni was the baddest Black Woman to walk the planet. She raised awareness and shifted the atmosphere wherever she went. Tupac’s brilliance shined brighter than the Sun. He lived and moved with creative – revolutionary- fearless-passion fueled speed of a comet. Afeni and Pac challenged, re-imagined, and transformed history.”

Part art installation, part sensory experience, WMWIF will showcase Shakur’s music, poetry and never before seen artifacts in a 20,000 square foot curated space akin to a contemporary art exhibit. Guests will transition through a myriad of surround sound spaces, rich with rarities embedded in technology. WMWIF will delve into the greater meaning of his activism, music, and revolutionary art. The attendees will be educated and enlightened through a labyrinth of emotions as they take this journey through his extraordinary life.

WMWIF is a creative collaboration led by Chief Curator & Vice President of Curatorial Affairs at The Rock and Roll Hall of Fame, Nwaka Onwusa and award-winning Creative Director Jeremy Hodges and his firm, Project Art Collective. "It is a privilege to be a part of such a monumental project”, Hodges said. “Tupac Shakur was my Malcolm; he was my Martin, and to build an experience that honors such a prolific man, cannot be summed up in words. We wanted to create a memorable experience that will inspire you to be better than when you walked in, all while leaving you with the knowledge that he was a true revolutionary spirit."

The Estate sanctioned exhibit, produced in partnership with Round Room Live, CAA, Universal Music Group and Kinfolk Management + Media, is slated to visit a limited number of US and international cities over the next few years.

Additional design support is provided by Perkins&Will and Ralph Appelbaum Associates — two of the world's leading architectural and exhibit design firms who also collaborated on the design for the Smithsonian National Museum of African American History and Culture in Washington D.C. Ralph Appelbaum Associates is also the exhibit designer for the forthcoming Obama Presidential Center in Chicago.

Steve Berman, Vice Chairman of Interscope Geffen A&M Records, and an Executive Producer on the show, said: "Tupac Shakur was without a doubt one of the most important artists of his generation, transforming culture through his music and ideas. Wake Me When I'm Free honors Tupac's extraordinary contributions and I know I speak for the entire Interscope and Universal Music Group family that we are so proud to be able to collaborate with our partners to bring this incredible exhibit to life."

About Tupac Shakur
​​​​​​​Though his recording career lasted just five years, Tupac Shakur is one of the most popular artists in music history, having sold more than 75 million records worldwide. In April of 2017, Tupac was inducted into the Rock & Roll Hall of Fame, making him the first solo hip-hop artist to be recognized for inclusion in his first eligible year. Tupac also found success and critical acclaim as an actor, starring in films like Juice, Poetic Justice, Above The Rim, Gridlock’d, and Gang Related. Tupac’s life and legacy continue to impact and influence culture today, from a groundbreaking performance via hologram at the 2012 Coachella Music and Arts Festival to a spoken-word appearance on Kendrick Lamar’s critically praised 2015 album To Pimp A Butterfly. In 2015, the GRAMMY Museum opened Tupac’s first museum exhibit, All Eyez on Me: The Writings of Tupac. Currently in production, FX will be releasing a 5-part docuseries on Tupac and his mother Afeni in 2022.